The day celebrates its founders, the Sisters of Saint Basil the Great.

Manor College was founded by the Ukrainian religious order, the Sisters of Saint Basil the Great in 1947. The institution remains the only higher education institution in North America founded by Ukrainian Sisters. Every year, the institution celebrates its founders with an annual Founders Day.

This year’s event served as the capstone to the institution’s 75th year. Throughout the previous 2022 year, Manor College celebrated its history with a book publishing, numerous events on and off campus and told the stories of alumni, professors, artifacts and moments in history throughout the year.

The keynote speaker for the event was Michael Landis, a professor at Manor College for nearly 30 years and program Director for Liberal Arts. Landis reflected on Manor College’s mission, in short, generating a peaceful world, enabling students to develop as individuals and instill an understanding of scientific, humanistic and ethical principles to form a global vision.

“The interdisciplinary and philosophical focus on knowing the good in order to do the good was always fundamental to my own intellectual and academic modus operandi (mode of operating),” Landis said. “From the simplest gesture of good will… to the most overarching institutional assessment and attendant strategic planning, we embody and enact in a deliberate lived manner the Judeo-Christian ethos with its constitutive values and virtues.”

The highlights of Founders Day are a pair of prestigious awards – the Mother Josaphat Medal and the Educator of the Year. 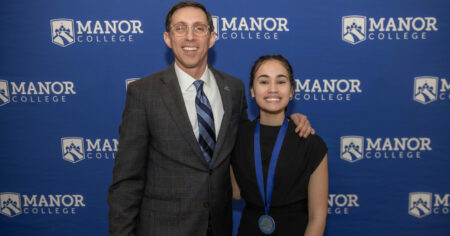 The Mother Josaphat Medal is given to a student who demonstrates strength of character and generosity of spirit. The recipient exhibits a responsible lifestyle evidenced through reverence, respect and service. Students are nominated by faculty, staff and students at Manor College.

Neysha Medina, a sophomore dental hygiene student at Manor College, received the 2023 Mother Josaphat Medal. Medina is a member of the Women’s Volleyball team and a Presidential Ambassador, all while maintaining a 3.93 GPA. Outside of the institution, she serves at her church, Calvary OPC Glenside, on Sundays, working with 2-3 year olds in the Sunday School program.

Read more about Neysha and the Mother Josaphat Medal.

Educator of the Year 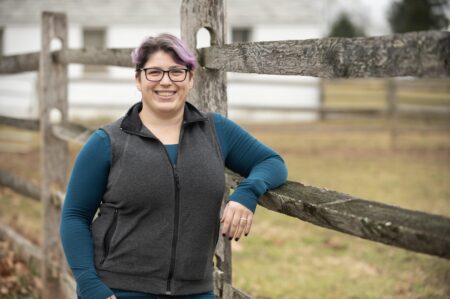 The Educator of the Year is given to a professor whose dedication and commitment goes beyond the classroom. This student-nominated award honors the selected faculty member who received the most votes.

Melissa Presti, CVT ‘18 received the 2023 Educator of the Year award. Presti started working in the veterinary field in 2013. She enrolled at Manor College in 2015 and graduated in 2018 with her Associate’s Degree in Veterinary Technology.

Her passion for teaching first began while tutoring as a student at Manor College. Currently, she’s an adjunct professor teaching animal handling and husbandry. Outside of Manor College, she works as an anesthesia nurse at Metropolitan Veterinary Associates in Norristown.

More on the Founding of Manor College

In 1947, St. Macrina College began with 11 students on a mission to educate the underserved. Manor College grew significantly since those humble beginnings.

At the center of the institution’s founding were the Sisters of Saint Basil the Great. They founded Manor College following two principal purposes – to establish a four-year liberal arts entity that would advance the professional lives of young women and an entity that would provide educational access to fellow members of their religious order.

Today, Manor College is a four-year institution that continues to provide high-quality educational access and service-based opportunities to students.

Whether it is 1947 or 2023, from these past 75 years, one thing remains constant – Manor College has always been and will continue to be a place that transforms students’ lives.

See the Photos from the Festivities

Remember Tuesday’s Tea with the Sisters