Discover the latest news and events from the Sisters of Saint Basil the Great.

The Sisters of Saint Basil the Great, who established Manor College in 1947, were founded in the 4th century by Saint Basil the Great and his sister Saint Macrina. Basil and Macrina were from a well-established family of saintly and intellectual leaders in the community. The primary influence in their lives was the Gospel imperative to love all human beings and serve each person in the name of God. 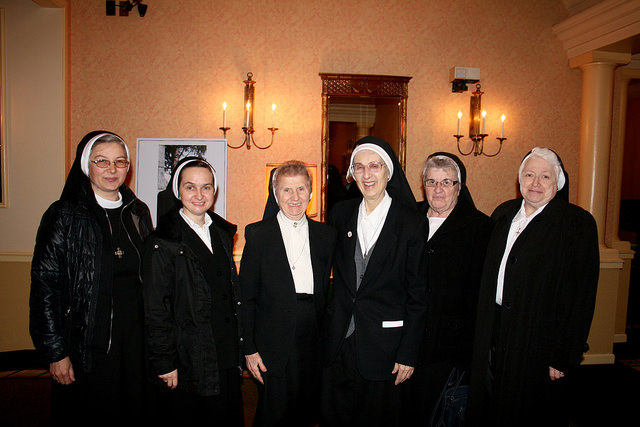 Saint Basil and Saint Macrina, also the founders of Eastern monasticism, urged their followers to be “co-workers with God” in the task of developing the potential of each human being through the means of education as a partnership with God in the creative act of the development of the whole person. The Basilian tradition spread throughout Asia Minor and Europe. By the 11th century, this tradition was rooted in Ukraine.
In 1911, the Sisters were invited by the Most Reverend Solter Ortynsky, the first Ukrainian Bishop in the United States, to come to Philadelphia and open an orphanage and school at North 7th and Parrish Streets. Mother M. Josaphat Theodorowych, OSBM, Major Superior of the Philadelphia Province of the Sisters of Saint Basil the Great was determined to found a school of higher education in the tradition of the great educator and founder of the Basilian order, Saint Basil the Great. Originally designed as a four-year liberal arts college, Manor College was to serve as a learning center for the religious of the Order of Saint Basil, and would also provide an opportunity for young women of Ukrainian ancestry to pursue higher learning in a setting where the culture and heritage of their ancestors would be preserved.

In the fall of 1947, the plans for a college were realized and a unique institution of higher learning was born. Manor College witnessed its beginnings in an old farmhouse on the grounds of the Basilian Motherhouse in Fox Chase. The College initially named Saint Macrina College, opened its doors to eleven eager students who sought entrance in the first year of the school’s existence. In 1931, the Sisters of Saint Basil the Great founded Saint Basil Academy, a private, Catholic high school for girls. To learn more about the Academy, please visit www.stbasilacademy.org

Presently the Order of the Sisters of Saint Basil the Great has its central government in Rome, Italy. There are foundations in Ukraine, Poland, Hungary, Romania, Argentina, Brazil, Australia, the United States, Germany, the Czech Republic, Slovakia, Bosnia, Croatia, and Italy. To learn more about the Sisters of St Basil, please visit stbasils.com or write to: Vocation Directress, 710 Fox Chase Road, Fox Chase Manor, PA 19046-4198. You can also visit the Generalate web page at www.basiliansisters.org and the website of the Sisters of Saint Basil in Argentina: www.hermanasbasilianas.org.ar

View the upcoming programs and retreats at the Basilian Spirituality Center.

The Basilian Spirituality Center has a podcast! Click here to listen!

The Sisters of Saint Basil the Great are holding the 89th Annual Pilgrimage to the Mother of God on October 4, 2020! It will be streamed live on Youtube. Learn more!