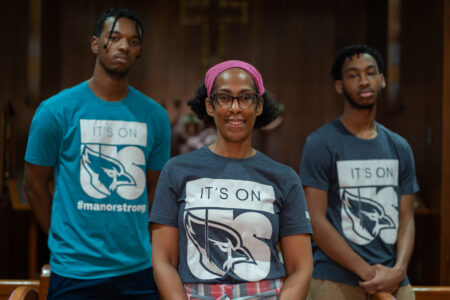 Manor College became one of 39 institutions across Pennsylvania to receive the ‘It’s On Us’ grant from the Commonwealth of Pennsylvania, officials announced.

The institution received $40,000 through the grant, the largest It’s On Us grant in the institution’s history.

“The Pennsylvania Department of Education is committed to supporting efforts that keep college campuses safe, inclusive and welcoming spaces for all students,” said Acting Secretary of Education Eric Hagarty. “The It’s On Us PA campaign cultivates change and provides colleges, universities and post-secondary career and trade schools with the support and resources necessary to protect learning environments and ensure they are free from sexual assault, harassment and violence.”

The grant will be put towards campuswide training for staff and students as part of Manor College’s Assault Prevention Program (MAPP). In addition, the grant will allow the institution to provide transportation to and from local bus stations to increase students’ safety while traveling to campus and home.

It’s On Us PA is a statewide campaign that invites everyone to play a role in ending sexual assault. Building off the momentum of the national campaign, It’s On Us PA brings together college and university officials to reframe the conversation around sexual violence and pledge to be part of the solution.

Manor College received the award in each of the last five years. Through programming from community partners like Victim Services Center and internally from Manor’s counseling and student engagement departments, students will learns kills to give them a voice to give affirmative consent and prevent sexual assault and domestic and dating violence.

Programming for students will span Spring and Fall 2023 terms. This program is interactive and informative for students, and includes learning self-defense techniques, consent skills and sexual assault prevention.

“I feel blessed, honored and ecstatic,” Allison Mootz, Vice President and Dean of Student Affairs at Manor College, said. “It truly is amazing to receive this grant again and be able to provide education, training and support service to our campus.”