The Ukrainian Heritage Studies Center (UHSC) was established in 1977 to preserve, promote,and perpetuate Ukrainian culture and traditions through educational and cultural programs. In addition to a folk art collection, the UHSC maintains an extensive Ukrainian library and archives. 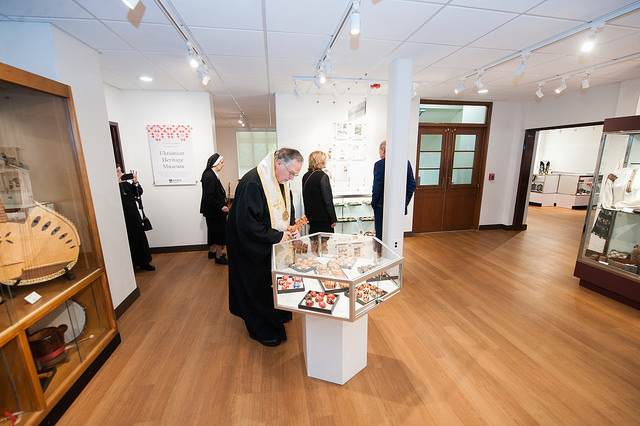 The collection includes gerdany (beadwork), embroidery, pysanky (decorated eggs), pottery, leather work, wood work, ceramics, and woven items from many different regions in Ukraine. Some of the items have been reproduced by master traditional artists from pictures or old originals that are deteriorating and in danger of being lost forever.
The UHSC is also collecting pictures of folk art from people who are not willing to part with the item but would like to share designs and patterns. Pictures of Ritual Breads (Korovai, Pasky etc.) are greatly appreciated since these items are highly perishable.

The renovations to the Ukrainian Heritage Museum was made possible due to significant contributions of Leonard & Helen Mazur, Dr. Barbara Zajak and the Ukrainian Catholic Foundation.  The museum has a new design from floor to ceiling which includes beautiful lighting, a handmade Ukrainian stove, crystal clear showcases a welcoming layout and is home to a new exhibit, the Maria Mazur Gallery.  The Maria Mazur Gallery is a exquisite, handmade pysanky gallery crafted by Leonard Mazur’s mother, Maria Mazur. All are invited to come and explore the Ukrainian Heritage Museum; please call 215 -885-2360 to make an appointment.

The UHSC in conjunction with Manor’s Adult & Continuing Education department conducts active outreach programs through tours of the folk art collection, workshops, presentations, and traveling demonstrations for various community organizations, schools, and festivals. Workshops in pysanky provide an opportunity to learn about Ukrainian traditions while creating a pysanky using the ancient techniques. For further information or to schedule a presentation contact uhsc@manor.edu or call 215-885-2360 ext. 293 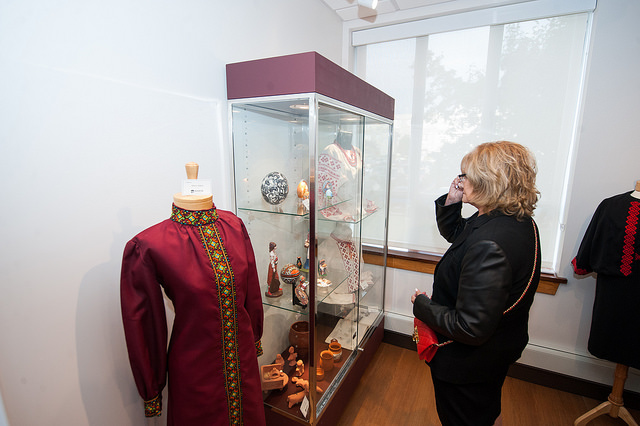 Artifact of the Month

The bandura is the national instrument of Ukraine. The kobza a much smaller instrument is considered the ancestor of the bandura and the names were often used interchangeably.

The kobza dates back to at least the 6th century. In the a14th and 15th centuries more strings were added to the kobza and eventually it evolved into the instrument that we see here today.

This bandura has 36 strings. It was crafted by Mr. Walter Pelensky who also crafted many of the musical instruments in the UHM. (picture of the bandura)

Kobzari were musicians similar to minstrels who traveled from village to village singing epic songs called dumy which recounted many of the battles and victories of the kozaks in their quest for freedom.

Many of the Kobzari were blind. They used the bandura to accompany their singing. The bandura became an important part of Ukrainian culture. When Soviet leaders such as Stalin decided to eliminate Ukrainian culture many Ukrainian kobzari or bandurists were persecuted or executed. In the 1930’s many bandurists came to a conference in Kharkiv, where they believed they would share ideas and record their music. Instead they were executed. Many others were sent to Siberia.

Some bandurists escaped to the west and were able to resurrect the bandura in the diaspora. Today the Ukrainian Bandurist Chorus of North America carries on the tradition of the kobzari.

Because of its history the bandura is not only the national instrument of Ukraine it is often considered the soul of Ukraine;