With national All-Americans and championship appearances, Manor College’s Men’s Basketball team is one of the longest and most successful squads on campus.

Manor’s Men’s Basketball team is one of the Blue Jays’ longest running and most successful athletics programs on campus.

Its history is filled with championship appearances and national players of the year. With an appearance in the USCAA National Championship Tournament in the 2021-22 season, the program continues to have a bright future.

Here’s how the squad developed into who they are today.

Manor College Men’s Basketball made its debut in the 1990-1991 season under head coach Dave Foody. The team finished its inaugural season 8-8.

The Blue Jays had their first taste of success during the 1994-95 season with Rich Casey at the helm. The team reached the Eastern Pennsylvania Collegiate Conference quarterfinals with an 8-8 record. Freshman Mark Cunningham became the first Blue Jay to receive a post-season award after he was named the Sam Cozen Junior College Player of the Year and All-EPCC Second Team.

In Casey’s third season, Manor reached lofty heights with a 22-4 record, including 15-1 in the EPCC. The Blue Jays were undefeated at home (9-0) as the EPCC Regular Season Champions. They lost in the finals of the 1996-97 EPCC postseason tournament.

Joe Heinbach, Sr. took over the team in 1997 and went on to become Manor’s longest tenured head coach. Under his guidance, the team qualified for the EPCC tournament 10 times and the National Junior College Athletic Association tournament in its first season in 2008-09.

Heinbach holds the school record for wins (170) and conference victories (145). Manor reached the championship game three times during that span.

The best player through those years – and arguably the best in Manor’s history – is Aaron Brown ‘06. He holds the distinction of being the institution’s only 1,000 point scorer. Brown is also the school record holder in career points (1,202), points in a season (671) and points per game in a season (30.5).

Manor College began a new era in the 2008-09 season when the school became a member of the NJCAA. The Blue Jays made their debut on Nov. 7, 2008, defeating Penn State-Schuykill 74-67 in the Turnpike Tournament in Pittsburgh. Manor won the tournament the next day, defeating Luzerne County Community College, 75-47.

The Blue Jays had its first winning season in the NJCAA in 2014-15. That team went 18-6 overall and 10-6 in the conference, reaching the postseason for the first time since 2008. Their stellar season included receiving photos in the NJCAA Division II Men’s Basketball poll on December 2, 2014.

That team was lead by guard Marcus Glover and forward Khalil Williams. The duo marked the first time multiple Blue Jays were voted to the All-Region XIX team.

During the 2015-16 season, Manor College became a nationally-ranked NJCAA Division II team for the first time on Jan. 5, 2016. They ranked as high as 16th in the pool that year and spent seven weeks receiving votes.

The success continued in the 2016-2017 season when the Blue Jays again won 20 games, this time under first-year head coach Diallo Daniels. It’s the first time the team had back-to-back 20 win seasons. Manor College again appeared in NJCAA Division II polls, spending five weeks in the rankings and reaching as high as 14.

That team was led by sophomore Kuante Sargent. His 20.7 points per game and 43.1 three point percentage lead the Blue Jays and helped him become the EPAC Division II Men’s Basketball Player of the Year. He was additionally voted to the NJCAA All-Region Division II First Team. 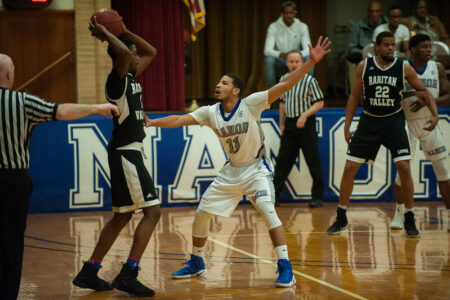 Sergeant’s season included the third highest point total in school history (558). The highlight of his season was a last-second buzzer-beater against Essex County College on Feb. 11, 2017 that gave the 18th-ranked Blue Jays to a 75-73 home victory over the second-ranked Wolverines. It was the first time Manor won a NJCAA nationally-ranked matchup.

Between the 2014 and 2018 seasons, Manor was 75-35 overall including an outstanding 44-11 at home with four tournament appearances.

Manor would leave the NJCAA in July 2020. During their tenure, Manor won 137 games, went to the postseason tournament six times and appeared in the championship once. Five Blue Jays were named All-Region XIX Division II selections and one was named an All-American.

Manor also had two EPAC Division II Players-of-The-Year, three Athletes-of-The-Week, and eight All-Academic Team Members.  A total of 34 Blue Jays went on to careers in the NCAA during that time.

The team made its USCAA Division I debut on Nov. 5, 2021 with a victory over NCAA Division II Bryn Athyn College 74-58. The team started 2-3 overall, but finished the regular season winning eight of their last ten contests.

The run was enough for the Blue Jays to be selected to their first USCAA Men’s Division I Small College National Tournament on Feb. 24, 2022. The Blue Jays would lose their first game in Petersburg to Bryant and Stratton College – Albany on March 7, 2022.