On January 31, 2020, Manor College held its annual Founders’ Day ceremony, a yearly tradition where the College community gathers to honor its founders, the Sisters of Saint Basil the Great.

Manor College President, Jonathan Peri commenced the service on Friday with a speech about Manor’s recent accomplishments and all the exciting updates on the horizon. Peri discussed the College’s goal of becoming a graduate degree offering college in only two years. This timeline is significant as Manor will be celebrating its 75th anniversary in two years.

The keynote speaker of the ceremony, Archbishop Borys Gudziak, gave a heartfelt speech about the importance of remembering one’s roots. He discussed the Sisters of Saint Basil’s impact on the College.

Each year on Founders’ day, two prestigious awards are given out — the Mother Josaphat Medal and the Educator of the Year. The Mother Josaphat Medal is given out to a student who demonstrates strength of character and generosity of spirit. Students are nominated by faculty and staff members. The Educator of the Year is given to a professor whose dedication and commitment goes beyond the classroom. This student nominated award honors the selected faculty member who received the most votes.

The winner of the Mother Josaphat Medal was Privish Sadaqat, a Pre-Science major who is involved in a variety of clubs and organizations on campus. Her kind spirit and dedication to Manor position her as the perfect recipient of this award. The list of nominees for this award included Sadaqat, Jenny Araujo, a Healthcare Management major; Cassie Keepfer, a Veterinary Technology major; Melissa Peters, a Pre-Nursing major; Sheresa Palmer, a Criminal Justice major; and Megan Davis, a Paralegal major. 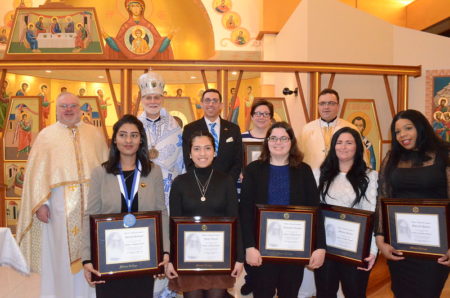 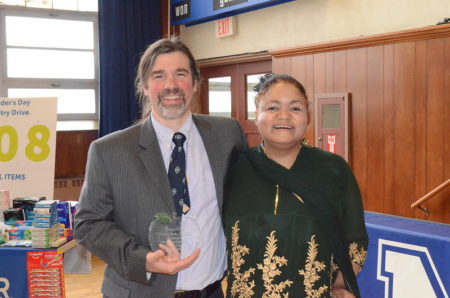 The recipient of the Educator of the Year award was Professor Mike Landis. Landis, well-loved by all, has been a Liberal Studies professor at Manor for 25 years. His dedication to students is known by all at Manor and he is more than deserving of this prestigious award. He stated, “It has been an honor to serve the Manor students in the realization of the Manor College Institutional Basilian Mission for over 25 years now.” Watch Professor Landis receive his award.

This year, the College also introduced a brand new award, The Anna Kiczula Award, for members of the Manor community who demonstrate the Manor mission and transcend their call of duty. This year’s recipient was Anna Kiczula, a staff member for over 50 years. Kicaula has held numerous positions throughout the College including secretary, bookstore manager, Physical Education Instructor, telephone operator and receptionist. Kiczula is known among everyone at the college for her kind heart. Watch Anna receive her award. 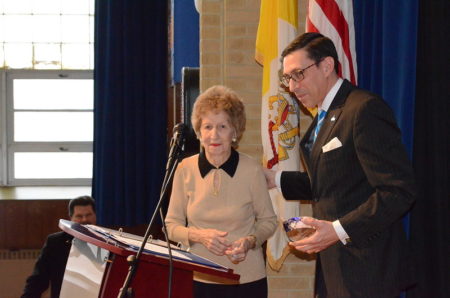 Nicholas Rudnytzky, Dean of Academic Services, stated “It is particularly poignant that we had our new Metropolitan, Archbishop Borys Gudziak, give the Founder’s Day Keynote Address on the same day that we honored a Manor College living legend, Anna Kiczula, for her lifetime of service. Thus, in one wonderful event, we honored our past traditions and continued dedication to service, along with reflecting on the present and illuminating the new path forward.  President Peri used the occasion to remind all that we are just two years away from our 75th anniversary. 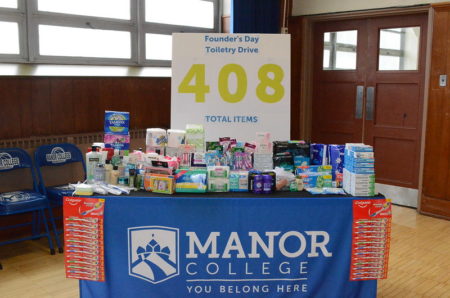 This year, the College community collected toiletries, as part of the Founders’ Day charity. 208 items were collected in total.

To conclude the ceremony, a choir composed of faculty, staff and students sang the alma mater, written by Shirley Beahan in 1986. Read the story about the alma mater here.