The 1950s and 1960s were an extremely formative time at Manor College. The fight for institutional accreditation and growth were ongoing. The college itself began to physically transform, with new buildings and structures needed to achieve accreditation. 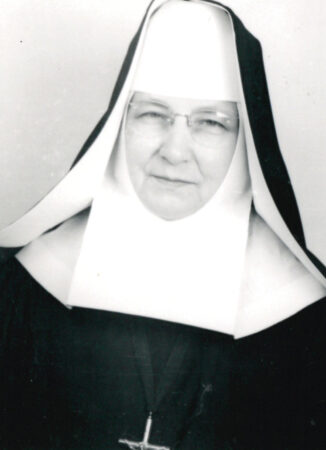 Mother Eusebia Bilas, OSBM entered the Order of the Sisters of Saint Basil the Great in 1917 and professed her final vows in 1926. She served as the second president of Manor College during the 1950-1951 academic year.

In her tenure, she was a staunch advocate for the college’s continued advancement as an accredited institution of higher learning.

In 1951, she left Manor College to become the general superior of the Order. Her work as superior would take her to Brazil, where she did mission work at the request of Josyf Cardinal Slipyj. She arrived in Brazil in December 1972 and taught catechism, the Ukrainian language and church music to Ukrainian Greek-Catholics in Brazil.

She died suddenly in Brazil in January 1973, just as her missionary work was getting started.

Sister Jerome Roman took over as president of Manor College in 1951 after Mother Eusebia became the general superior of the Order.

Sister Jerome has two prominent distinctions: She is Manor’s only two-time president, serving from 1951 to 1954 and 1964 to 1970, and the first formally elected president of the college (during her second tenure).

Sister Jerome was born in Peckville, Pennsylvania, a small town just north of Scranton. She entered the order in 1926 and professed her final vows in 1934.

She earned her bachelor’s and master’s degrees in English from Fordham University and received a doctorate from the Catholic University of America.

While at Manor College, she taught theology and English in the 1960s and 70s. She, too, left Manor College for a spell during the late 1950s and early 1960s to serve as the general superior of the Order.

During her second tenure at Manor, she oversaw the opening and consecration of St. Josaphat Hall in 1964. Three years later, she was among those who initiated the groundbreaking of the Basileiad library and, on March 23, 1969, prepared the cornerstone for the library.

Under her guidance, the college would receive Middle States Accreditation in 1967, a completion of a decades-long journey for the college to receive official recognition.