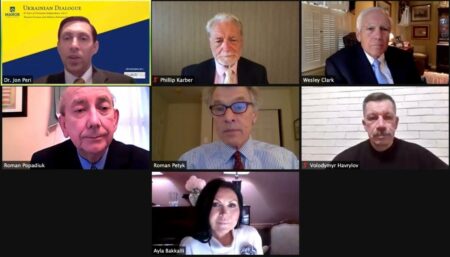 “The strength of Ukraine lies in the new generation, and we look to the future,” said former U.S. Ambassador to the Ukraine, Roman Popadiuk, who moderated the latest Manor College Ukrainian Dialogue Series last month. This was the tenth program in the series presented by the Ukrainian Selfreliance Federal Credit Union, and it was its most successful. More than 250 signed up for the program and there was an audience of nearly 150 tuning in online.

“An entire generation of new Ukrainian officers rose to the occasion of new offensives against aggression, and they defended their country with great initiative,” says Dr. Phil Karber, President of the Potomac Foundation who conducted more than two dozen visits to combat zones in the Ukraine. He detailed a recent campaign that placed Ukraine in the heart of a battle well fought by the new generation of army soldiers. He told accounts of fighting that went on for a long time which included one of the longest brigades in military history.

U.S. General (Ret.) Clark presented during the dialogue and said, “Ukraine is one of the fundamental issues today. Right now, tonight in Ukraine, the Russian and separatists forces have been mobilized. It’s a threat, and there are countries playing an ambivalent role. On the political side, President Zelenskyy is trying to bring diplomacy and unity, so his administration is complicated and pulling in many different directions. I believe time is on the President’s side and Ukrainine people. U.S. President Joe Biden understands the position of Ukraine in the west. We need to support Ukrainie and strengthen their democratic process.”

General Havrylov, former Defense Attache of Ukraine also spoke. “In February 2014, the Ukrainian people woke up with most of its leaders gone. People from all sides moved to protect the county. There was one business professional I know who was a successful in his city, but when he saw the events of February 2014, he decided to volunteer and support. They didn’t realize our resolve. We need to be owners of our destiny. The contribution of our European and U.S. partners is crucial.”

Ayla Bakkalli, Executive Member of the World Congress of Crimean Tatars, asid,  We understand the lay of the Ukrainian land. To understand the occupation of Crimeia, we only need to look at the lay of the land. The peninsula is one of the most critical positions surrounded by water, and it is in the middle of the EU nations. The post-soviet fault line runs through Ukrainie and lands in Crimea. There are human rights issues to the occupation. As Crimea becomes more isolated, outsiders think it’s quiet but it is not. It is in fact filled with the fear, disappearances, murders that are the reality. Freedom of thought, conscious religion is all disruptive.

Bakkalli remembers meeting former U.S. President George W Bush. “I mentioned I was a Crimean Tatar… and that we were developing into a democracy. One of his comments he made to me has stayed with me. He asked rhetorically, ‘Where is the heartland of Russia?’ What I wanted to answer is, “The heartland of Russia is not Ukraine.”

Karber reminded the audience that sanctions are not uniform–some work on individuals, some companies, so there isn’t a unified approach. When there is not uniformity, there is no depth to the sanctions. We’ve tried sanctions, but we’ve tried them and there is no evidence that it worked. It’s time we wake up and realize Russia is using military instruments as it’s currency of power. The real challenge is the Ukraine air force, which needs to be modernized. That won’t happen without external help.”

The Ukrainian Dialogue Series was made possible by the support of the Ukrainian Selfreliance Federal Credit Union headquartered in Feasterville, PA. “For more than half of the attendees, this was their first program they attended,” says Dr. Jonathan Peri, President of Manor College. “We are hoping to expand our outreach with this event and bring it across the globe to bring its many critical issues to light.”