On Thursday, February 7, 2019, Manor College sports-management students and basketball athletes had the opportunity to visit the new state-of-the-art Philadelphia 76ers training facility. Located in Camden, NJ, it first opened on September 23, 2016. The facility is home to all the basketball operation staff members and makes up for 66,230 of 125,000 total square feet of space that can be found along the Delaware Waterfront’s eastern base.

Leading this exciting trip was Professor J.P Lutz. Professor Lutz is a sports fan with experience in marketing and ticket sales for the Philadelphia Eagles. This was his first time visiting the facility and he expressed great joy and excitement in being there. He expressed his appreciation for the student opportunity: “The Philadelphia Sixers provided our students with an incredible opportunity to tour their new corporate headquarters as well as learn from some of their top ranking executives. I was excited to see students who are looking to potentially work in the sports industry take advantage of this field trip.” 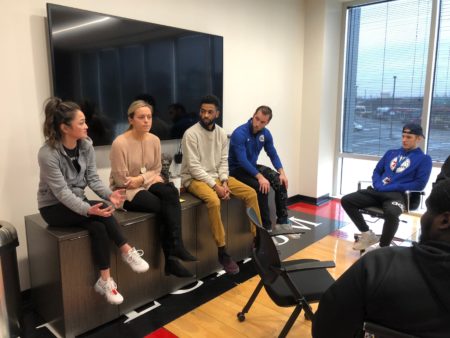 The four panelists showed great hospitality to both the students and leaders on the trip for more than an hour, answering numerous questions. Some questions were about what the panelists enjoy about their jobs and what they do not. There were also questions about the opportunities that can be offered to college students. Even after the panel discussions, the panelists opened the door for further discussions, and offered their business cards for follow-up conversations.

While the Manor College group primarily stayed on the business side of the organization, students were able to see some unique sports items that included the 1982-83 NBA Championship Larry O’Brien trophy, a floor sample from the Spectrum, and jerseys from all-time great Sixers players.

One thing that made this trip even more memorable is that the students were at the facility during a historic week of trade. On February 5, after a 119-107 loss to the Toronto Raptors, a series of major trades were made. In the early hours of the morning, Philadelphia received Tobias Harris, Mike Scott and Boban Marjanovic, all from the Los Angeles Clippers. Additionally the Sixers traded Wilson Chandler, Mike Muscala, and Landry Shamet and give up first-round picks for the 2020 and 2021. As the student group left, a press conference at 5:00pm was being prepared for, in which another exciting trade was made: Markelle Fultz to the Orlando Magic for Jonathon Simmons. 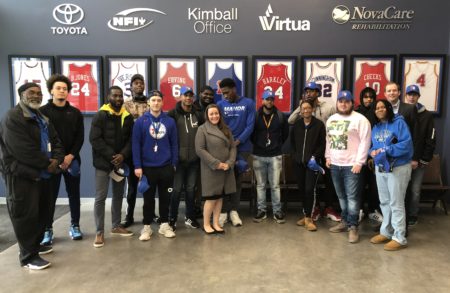 The trip served as a great point of connection for the College cohort. Alumnus Darrell Smith, Jr, attributed his success to his time at Manor: “If it weren’t for Manor, I probably wouldn’t be here at the Sixers.” Additionally, Professor Lutz was excited to see students who are looking to potentially work in the sports industry take advantage of this field trip.

Kimberly Hamm, who serves Manor as their Vice President of Advancement, also attended the trip: “We are so pleased that the Sixers organization hosted our students for this exciting panel. All the staff were so kind and open about their experiences in the industry. Our students learned so much from and had a great time.”