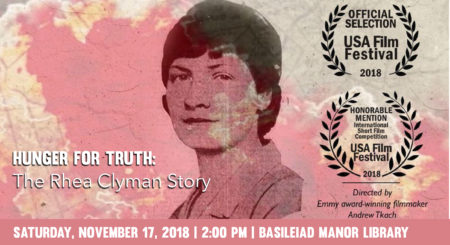 Manor College will host the Philadelphia premiere of the movie “Hunger for Truth: The Rhea Clyman Story” on Saturday, November 17, 2018 at 2:00 pm. The film, by Emmy-award winning director Andrew Tkach, will be screened in the Basileiad Manor Library and is presented by the College’s Ukrainian Heritage Studies Center. At the conclusion of the viewing, Mr. Tkach will offer some remarks on his journey in making this work as well as conduct an open Q&A session with the audience.  The event is free and open to the public.

“The Ukrainian Heritage Studies Center is proud to sponsor the presentation of Mr. Andrew Tkach’s moving work, Hunger for Truth: The Rhea Clyman Story. This film and its journey in shedding light on a dark episode in our common history is precisely what Manor College’s mission of enabling students to fully develop as individuals and instill an understanding of scientific, humanistic and ethical principles to form a global vision is all about,” states Nicholas Rudnytzky, Manor College Dean of Academic Services.

“Seeing what Mr. Tkach’s passion for inquiry while applying critical thinking and effective communication skills resulted in is a most effective example of the power of higher education. Putting all these elements together is how we can serve both society as well as social good and will provide our students with the tools to arm themselves to be vigilant and defend against such evils in the present and future.”

In 2017, the Pennsylvania Senate approved Senate Resolution 244 designating November as “Ukraine Genocide Remembrance Month” and Philadelphia’s City Council formally recognized the 85th anniversary of the genocide via resolution in October 2018.

In an age when disinformation muddles the truth, a new voice cuts through the historical haze. She is Rhea Clyman, a young Canadian reporter who traversed the starving Soviet heartland when Stalin’s man-made famine was just beginning.

Clyman’s newly discovered newspaper articles from 1932-33 show her remarkable resourcefulness and courage. After she was banished from the USSR for writing about the Holodomor and the Gulag, this brave woman went on to cover Hitler’s early lethal years in power.

Today, another Russian autocrat is trying to dismember Ukraine by using disinformation and brute force. Three years into Ukraine’s forgotten war, its soldiers are still held as prisoners of war. In central Ukraine, two little girls are growing up without their dad–Serhiy Hlondar. He’s a member of Ukraine’s Special Forces who was captured in the battle of Debaltseve, a day after Russian led forces were meant to silence their guns in the Minsk 2 Peace Accord. Hlondar has never seen his youngest daughter, and after 1200 days of captivity, his family has received only seven letters to keep their hopes alive.

Prior to forming his own company, Messy Moment Media, Tkach was the principal long form producer of Christiane Amanpour for both CNN and CBS 60 Minutes, winning multiple Emmys, Duponts, and Peabodys for his work. He is currently producing a weekly environmental documentary series in Kenya made by African filmmakers called Giving Nature a Voice.