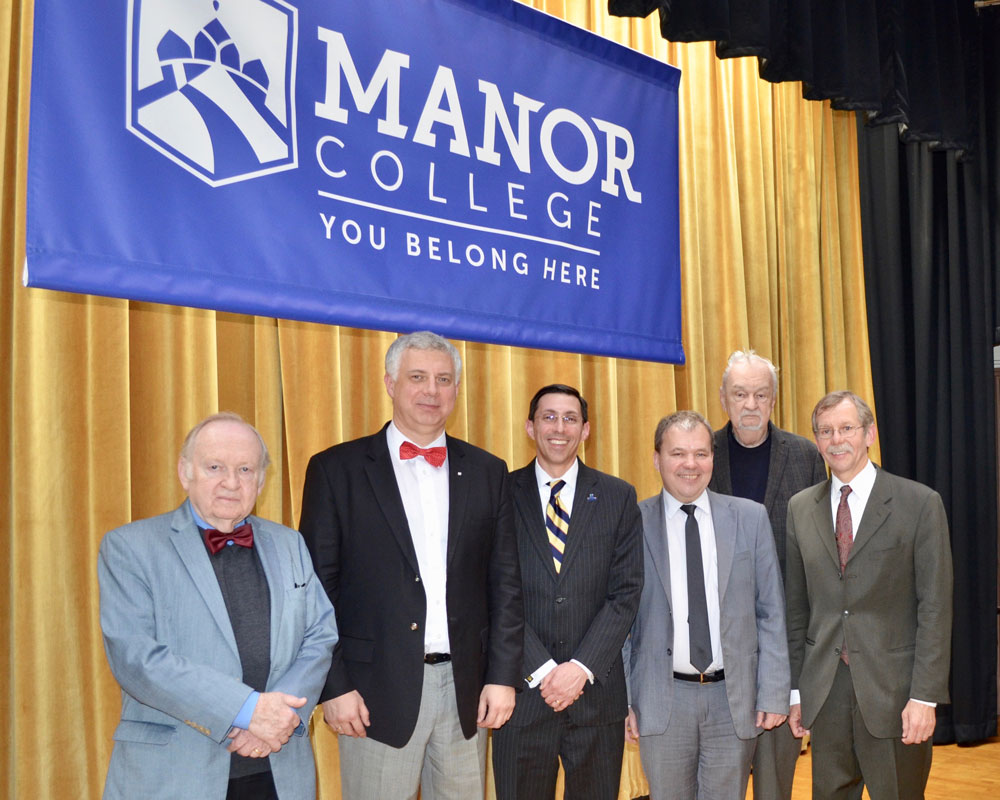 Over 100 members of the Ukrainian-American community traveled from New York, New Jersey, Delaware, Washington, D.C. and Pennsylvania to gather in the Manor College auditorium to be apart of Ukraine: Education as the Battlefront of Democracy.

The dialogue examined the most crucial areas of educational reform needed in Ukraine in order to protect and preserve free and democratic ideals. Dialogue moderator, Dr. Albert Kipa, Former Rector (President) of Ukrainian Free University in Munich, Germany, and Professor Laureate of Comparative Literature, Muhlenberg College opened the dialogue by sharing a few well-known quotes defining the word “education” and said, “education tries to bring the best out of … humankind.” Kipa went on to say that the purpose of this dialogue is to talk about what the United States can do offer Ukraine greater stability in our world.

The first speaker, Dr. Serhiy Kvit, Former Minister of Education and Science of Ukraine and current Director the of Kyiv-Mohyla Academy School of Journalism focused his remarks on the reform of Ukrainian universities and colleges. Kvit noted that Ukraine’s main reform concept is rooted in internationalization. Kvit shared the main contributing factors on why Ukrainian universities and colleges are not where they ought to be. Kvit said, “No generation change has taken place yet in higher education administrators. The current administrators grew up in soviet times and are not aware of contemporary western standards of higher education.”

Other speakers included Dr. Andriy V. Zagorodnyuk, Vice-Rector of Vasyl Stefanyk Precarpathian National University, who focused on the challenges his university faces. Zagorodnyuk shared some impressive statistics indicating that the Precarpathian University is ranked 4th in Western Ukraine and 16th in Ukraine. Zagorodnyuk also discussed the happenings at Science Park, a brand of the university that focuses on scientific research. One project that he is currently working with is focusing on the effects of aging of neurons when calories are restricted. This was demonstrative evidence that while some educational corruptions exist in Ukraine, the Precarpathian University can be a model for the other 900 or so institutions of higher education.

The third speaker, Alex Kuzma, Executive Director of the Ukrainian Catholic Education Foundation which supports the Ukrainian Catholic University (UCU) located in Lviv, Ukraine, focused his remarks on how UCU faculty, administration and students are truly in the battle for educational reform. Kuzma shared a heartbreaking story about how one of UCU’s community members was shot and killed from a sniper bullets during the 2014 Kiev protests while trying to drag another injured UCU member to safety. Kuzma also noted that while we are here today to talk about educational reform in Ukraine, he said, “We have to approach this issue with a certain level of humility – knowing that even here in the United States, higher education is in crisis and we have something to learn from the students and faculty in Ukraine in terms of forcing economic, political and educational reform.”

The dialogue concluded with an impromptu speaker, Dr. Leo Rudnytzky, a retired Professor from La Salle University and former Rector (President) of Ukrainian Free University, who was called up from the audience by President Peri to offer remarks. Rudnytzky reflected on his days as President of the Ukrainian Free University and said, “Much progress has been made. I remember the days when I was rector and there were rectors and professors from other universities in Ukraine who would ask me: what’s the most important thing that we can do in terms of education reform?” Rudnytzky shared with the audience that he would continually answer, “Decentralization.” Meaning that it should be up to each individual university about how they wanted to run their university. This suggested a break from a time when government intrusion was part of the culture. Rudnytzky also posed a question to Kvit (his former student) asking about student rights in Ukraine: whether students have a say in the curriculum and if their ideas are being considered. Kvit answered Rudnytzky’s questions by saying, “the problem is we can’t change the system because there are too many higher education institutions. There are about 900 institutions of higher education, most of which are not actual universities, and … Ukraine needs to consolidate the number of higher education institutions in order to really change the system completely.”

The dialogue concluded with a brief Q&A period where several audience member questions were answered courtesy of Dr. Kipa’s moderation, followed by some light refreshments and a meet and greet with the honored guests. President Peri closed the dialogue by saying, “if it’s not us who begin to address the issues presented in Ukraine, then who will? We can really make a difference and it’s just a matter of collaborating.”

As president of America’s only institution of higher education founded by Ukrainian religious sisters, President Peri later said, “Most folks probably don’t know enough about Ukraine, other that it borders Russia, and that’s true, but what needs to be known is that Ukraine is struggling to be westernized because it has cultural lag from soviet times compounded by Russia’s war with Ukraine. This cultural lag, along with pay-for-GPA corruption and a weak economy, slows Ukraine’s westernization, and therefore, harms Ukraine’s upcoming students. Our program today was about what we can do to help. The answer we got was: We need partnerships with American institutions. We’re glad we can be at the forefront of that conversation.”

Stay tuned! Manor College is going to continue host Ukrainian focused dialogues every semester and on May 25, 2017 at 5pm, Congressman Brendan Boyle along with some fellow members of the Ukrainian Caucus will be having a congressional hearing / town hall styled event on Manor’s campus open to the community.