The Ukrainian Dialogue hosted by Manor College on Oct. 11 proved especially timely thanks to recent political developments. U.S. Congresswoman Madeleine Dean, member of the Ukrainian Caucus, and Myroslava Gongadze, Chief of the Ukrainian Service at Voice of America, spoke to a full house, with Manor College president, Dr. Jon Peri, serving as moderator. The Dialogue topic was “Emerging Women in Politics in, of, and for Ukraine,” and both Dean and Gongadze relied on their extensive knowledge in the field to inform the conversation. 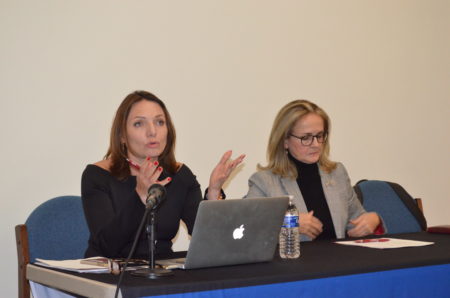 Gongadze opened the discussion by explaining how women can end up in politics: “sometimes it takes a tragic life experience and a lot of courage to find one’s voice.” Gongadze’s husband, a journalist who uncovered Ukrainian government corruption, was murdered in 2000, an event that propelled her into the spotlight. “I made the decision to speak up,” she said, and she used her knowledge to raise awareness about corruption and fraud. Her fight for justice was one of several precipitators off the Orange Revolution in 2004.

In her current role at Voice of America, Gongadze advocates for a basic, yet often ignored indicator of parity: equal representation. She tells her reporters that every story needs 50/50 representation of men and women  – “there’s more than enough women,” she said, “qualified to talk about any subject. But sometimes reporters need that extra push to reach out to them. “I think as women we have to support each other,” she said.

Rep. Madeleine Dean opened by mentioning her children and grandchildren. “Motherhood is a lens through which I shape my work,” she said. She discussed the importance of diversity in government, and how this is related to women specifically. “When you put women at the table, it changes the conversation.” She noted that gender equality is now enshrined in the Ukrainian Constitution, something that “we struggle with here in the U.S.”

Not surprisingly, the conversation shifted to President Trump’s phone call with Ukrainian President Volodymr Zelenskyy – a recent hot topic issue. Gongadze brought the conversation back to representation, highlighting the issue of perspective: 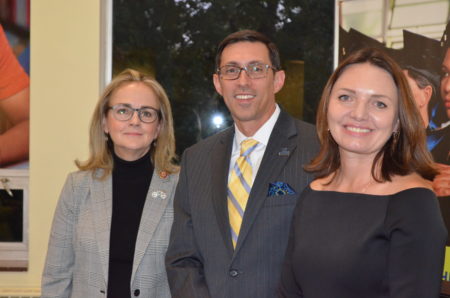 “[When it comes to this controversy] Ukrainian voices are not there. Everyone is talking about Ukraine, except Ukrainians. We don’t have an Ukrainian ambassador in Washington. I understand the [Ukrainian] government, they do not want to be involved in American politics… at the same time, I think it would be very effective to have Ukrainian voices in American media.” Another problem, she said, is that American journalists frequently cover Ukrainian topics from abroad. “You want to cover Ukraine? Go to Ukraine. Don’t cover Ukraine from Washington or Moscow,” explained Gongadze.

Rep. Dean noted that healthy diplomatic, relations between the allied countries are valuable and necessary for maintaining democracy: “Our president uses relationships with foreign leaders for personal gain, for political gain, as a transactional method, instead of recognizing our friends and how can we lift up your country, your democracy, your sovereignty as we grow our own.”

After Dean and Gongadze presented, moderator Dr. Jon Peri fielded questions from the audience. In response to a question about which Ukrainian women in power the audience should be taking note of, Gongadze explained that sometimes, the best way to lift women up is to notice when they are reaching. “Look around and support those who have not yet revealed their strengths,” she advised.

View more photos from this event in our Flickr album