Join us as we celebrate the anniversary of Ukrainian independence and hear from experts about this historic event. 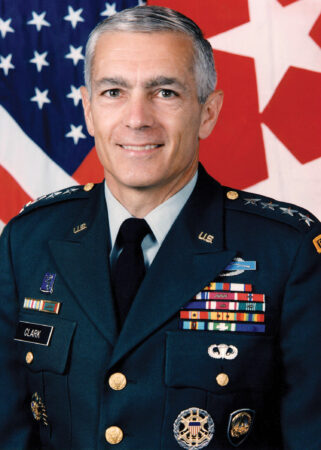 US General (Ret.) Wesley Clark retired as a four star general after 38 years in the United States Army, having served in his last assignments as Commander of US Southern Command and then as Commander of US European Command/Supreme Allied Commander, Europe. He graduated first in his class at West Point and completed degrees in Philosophy, Politics and Economics at Oxford University (B.A. and M.A.) as a Rhodes Scholar. While serving in Vietnam, he commanded an infantry company in combat, where he was severely wounded and evacuated home on a stretcher. He later commanded at the battalion, brigade and division level, and served in a number of significant staff positions, including service as the Director, Strategic Plans and Policy (J-5). In his final assignment as Supreme Allied Commander Europe he led NATO forces to victory in Operation Allied Force, a 78-day air campaign, backed by ground invasion planning and a diplomatic process, saving 1.5 million Albanians from ethnic cleansing.

Dr. Phillip Karber, President, The Potomac Foundation; Professor, Georgetown University. Dr. Karber received his BA in political science from Pepperdine College, and PhD in international law from Georgetown University. At the request of the Ukrainian Government, between 2014-16 he conducted 25 visits to the combat zone spending 177 days with front-line units and interviewing commanders. He and GEN (ret) Wesley Clark presented the first report on Ukraine to a closed session of the Congressional Armed Services Committee in July 2014 and have been strong proponents of increased military assistance.

Ayla Bakkalli, Executive Member, World Congress of Crimean Tatars; Representative, United Nations Permanent Forum for Indigenous Issues. Ms. Bakkalli is the Crimean Tatars Mejlis’ representative in the United States. She is a member of the World Congress of Crimean Tatars and an Adviser to the Permanent Mission of Ukraine for the United Nations on Indigenous Matters. Occupied Crimea, closed for any form of international control and monitoring, is now an area for systematic violations and abuses of human rights and fundamental freedoms, targeting, first of all, the Ukrainian activists and the indigenous people of Crimea – Crimean Tatars. They are groundlessly detained and imprisoned, activists are disappearing, their families and friends are facing intimidations.

Thank you to our sponsor: